Kitty Flanagan opens up about her most profound fear.

If you’re looking for some lockdown entertainment, a delightful binge session of Kitty Flanagan’s Fisk is highly recommended! It’s her first foray in producing and directing, and the six-part ABC series is as down-to-earth and as consistently entertaining as the much-loved comedian herself.

Dropping into Broad Radio, Kitty opened up to host, Jo Stanley about one of her most profound fears; sex scenes.

“I don’t even need to see sex scenes,” she said with a resolute declaration they will never. Ever. Appear in Fisk. “If they go into the bedroom and shut the door, I’ll just imagine what they’re doing. I feel like my imagination is much better.”

“Imagine trying to do a sex scene and the director comes over and is like ‘sorry what are you doing?’, ‘I thought I was doing sex. Is this not it?’, and you find out for all these years you’ve been doing it wrong. I would never put myself in that position,” she told Jo.

Kitty’s distaste for on-screen, usually unrealistic sexual depictions is clear in her latest book, 488 rules for life: The thankless art of being correct. Some moments of wisdom double as direct gabs at the film-making industry, like: ‘no one has sex on the kitchen floor’ and ‘women wash themselves to get clean, not to get off.’

Having received the Flanagan ‘safe to watch with children in the room’ tick of approval, Kitty’s series brings us Helen Tudor-Fisk, a contracts lawyer who suffers a riotous case of foot-in-mouth disease. Now with an expanding acting repertoire, Fisk follows the comedians role in the ABC’s Utopia as Media Manager, Rhonda Stewart.

In her typical dead pan style, Kitty said, “Now I’ve got two characters, one with straight hair and one with curly hair so I think that’s it for me, that’s the extent of my acting skills.”

Kitty’s Fisk proved worth the wait, an endeavour that gifted her some valuable teaching lessons. One standout is that it’s always better to be funny when you’re trying to be; an insight that followed the on-set realisation that she runs ‘like a mum late for tuck-shop.’

Like anyone who sits in the public’s, occasionally nasty eye-line, Kitty understands that a daggy run is the tip of the iceberg when it comes to criticism. With women, in particular, copping the brunt of commentary about how they look, dress, and perform.

“I do understand when people get a bit vain about it because you are being scrutinized,” said Kitty. Transparent about a life-long insecurity of hers, acne scars from youth, Kitty was happy to learn about ‘something magical’ they can do in post-production.

“They can make your face look a bit nicer… we didn’t have a lot of money in the budget for that sort of thing so it could only happen if I was sitting really still,” she said.

Women in the industry being scrutinized is something Kitty feels circles back to a sisterhood that “can be a little two-faced on that whole thing”. “It’s never the men who write in and say ‘why is she wearing that top, I don’t like those earrings,’” she said.

If Kitty’s success can prompt a teaching lesson, other than the importance of intentional humour, it’s that if you’re willing to persevere (and have heaps of talent), you can prosper in an industry that gives women a run for their money.

Between acting, directing, writing, and world-renowned stand-up, Kitty has covered the arts comprehensively. When asked about what’s next, Kitty answered, “I would like to do more Fisk, I don’t think we’re quite done with that.” 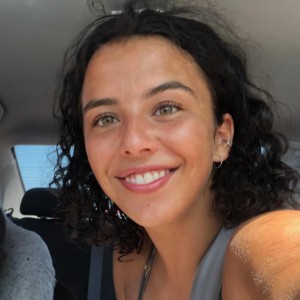